If he can’t figure out the simplest spells, how is Quinn supposed to impress Cate in the wizard contest?

A bloodthirsty goddess and human power games stand in the way of survival for the magical folk of Vancouver.

Trahaearn, the Arch Druid, longs for the simple times when a battle with vampires was his biggest worry. Now that humans can see the whole of the faerie world, he fears for the very survival of the magical folk.

The last time humans saw the fae, it was genocide. This time Trahaearn must find a way for the two worlds to live together, or both will die in a massacre that will spread like a plague over the globe.

Kali has a different idea of the new world. She wants blood, and lots of it. If she can’t stop Trahaearn, she will die. She may be new to this plane of existence, but she won’t let anyone get in her way.

If you like Urban Fantasy stories that pit vengeful goddesses and religious zealots against a man who fights for peace, you will love Druid. 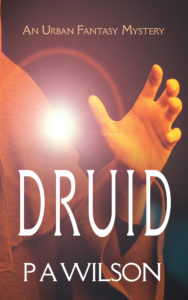 BUY EBOOK FROM ME

Sign up for your free ebooks, videos, and community.

We value your privacy and would never spam you